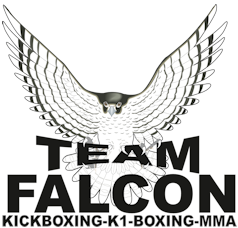 Falcon Kickboxing is a friendly club based in Romford, Essex suited for all ranges people wishing to just keep fit, learn a form of self defence or compete in competition. Beginners are more than welcome with first time students eased in with the very basic techniques and allowed to progress at the level and pace they feel comfortable with.

The club was started by Paul Green a 4th Dan Black Belt who is an experienced Full Contact Kickboxing fighter and Boxing trainer who is assisted by 2nd Dan Black Belt Matt Higgs (Fight team coach and match maker) and 1st Dan Becky O'Sullivan (Trainer and Junior development).  The club have trained many students over the years who have competed and won in various kickboxing styles including Full Contact, K1, semi Contact and light continuous in Britain and Europe, with students taking Southern Area, British, European and World titles with the top kickboxing governing bodies in fights that have been aired on various national TV channels.

The Falcon style has developed from a solid base of Kickboxing with a strong belief in keeping up fitness and strength levels as it is no good knowing many techniques but only having the fitness to use them for a matter of seconds, which has been proven by the fighting pace that can be sustained by Team Falcon fighters. The Falcon system incorporates techniques from other styles such as Tae-kwon-do which kicking techniques helped Falcons kickboxers become World Full Contact Kickboxing champions when combined with traditional boxing, which has also proven successful with Team Falcon producing Southern Area and British boxing champions.
Thai boxing techniques are taught and various moves from other styles for the students looking for a more practical self defence system or when competing in K1/Glory style kickboxing bouts.  Team Falcon fighters have also been successful fighting under MMA and Muay Thai rules although the club is not a traditional Muay Thai gym proving the versatility of the fight team.  Members have also competed and won MMA bouts proving the versatility of Team Falcon fighters and the style.

The fight team coached by Paul Green and Matt Higgs compete on a very regular basis locally, across the country and globally from competitions for the very novice fighter up to international professional kickboxing.

All ages, levels of fitness and ability are welcome and the classes are split into adult and junior (normally under 15).

Junior classes are taught in slightly more of a traditional martial art style than the adult class, with participants wearing karate style Gi's. Belts can be attained through a regular grading system which helps give the students a set target whilst training.

Adult classes are taught in a style of class that can be compared more to boxing than to traditional martial arts.  A regular grading system is used for those wishing to participate to help give the students a target whilst training but it isn't compulsory.

Personal training is also available on request by a number of the trainers for all levels of abilities and can be tailored to your goals (e.g. fitness, self-defence, fight specific etc), please contact for more information on this service.